When we think of culture, we think of positive aspects such as history, arts and achievements. For something to become integrated into culture, it has to become a set of normalized ideas, attitudes and practices. For this reason, it is encouraged that we be mindful of the possibility of unknowingly contributing to harmful aspects of culture. The more we engage in this the more we perpetuate it. Things become a part of culture when we continue to normalize them. Therefore, rape culture is normalized beliefs and behaviors around sexual violence and aggression. Because the “Me Too” movement has given much awareness toward sexual harassment and sexual assault, most people can conclude that something as abrasive as a rape joke is a perpetuation of rape culture. However, many people do not take the time to reflect on ways that they may be inadvertently perpetuating rape culture.

Take the phrase, “that’s what she said.” When the phrase first surfaced, it was debated whether this was harmlessly inappropriately or just inappropriate. Once the phrase was adopted by the popular television show “The Office,” it became heavily normalized as memes, gifs and jokes circulated through the internet. It is now widely argued that the phrase is not only inappropriate but “serves as an analog to the rhetoric of rape culture” as it encourages laughter at sexual misconduct, what’s considered blurred lines and reinforces the silencing of victims of sexual trauma for fear that their disclosure would be met with such a response- “that’s what she said” (Meier and Medjesky 2018).

As mentioned above, one of the ways that we may be inadvertently perpetuating rape culture we relay through seemingly harmless words. Much of the time, the message we send does not relay our intentions and can have a negative impact on the listener and/or audience. Undoubtedly, if we take the time to reflect on those “harmless” phrases and sayings we use every day, we will find that the message it conveys is not so harmless. For instance, when telling a survivor of sexual violence “it could have been worse.” While we may have good intentions, the message sent minimizes the survivor’s experience and focuses their attention on outcomes other than their own. Another example is telling a kid who comes home complaining that another kid is teasing them that that means that kid likes them; this sends the message that mean or aggressive behavior is a signal of attraction and that this behavior is acceptable.  Likewise, the behavior of the kid doing the teasing is being reinforced by the message that their behavior is acceptable.

Below is a visual of some common not-so-harmless phrases and sayings and their underlying message: 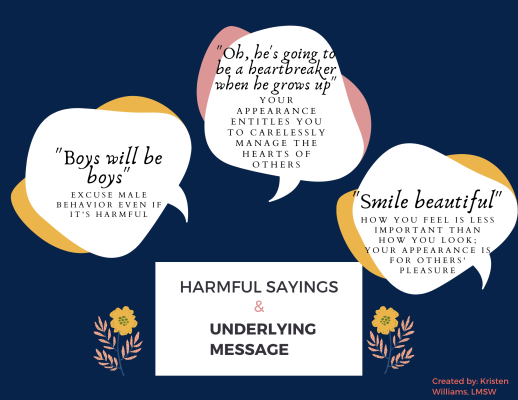 Often time, we grow up hearing a phrase or saying from our parents or family members and continue to use it into our adulthood; it is the same for behavioral practices. Maybe you are a parent and you use sayings or enforce rules that you never took the time to dissect. It is important for us to reflect on the message our words and actions send to others, particularly young children who are still navigating their way through the social world and most of their context is unspoken norms and enforced or modeled behavior.

I recently came across a story on the Internet that was in a meme format; the adult was having a conversation with her younger family member (maybe 9 or 10 years old) where he was sharing that he recently disclosed his interest in a classmate to that classmate and asked to go steady. He was rejected and was expressing discouragement to his adult family member. She asked him, “Well, do you know what you do now?” He replied, “Yes, I know…keep trying.” His adult family member replied, “No. She gave you her answer, accept it and move on.”

Concepts such as “friend zoning” are harmful because they impose shame on the fact that someone, usually a female, chose not to be in a romantic relationship with her male friend. However, this decision deserves no shame. Males who are friends with females are not entitled to anything other than friendship. So to call two people in a friendship “friend zoned” implies that there is something wrong the decision to remain friends. In addition, it is heterosexist to assume that the relationship between two people has the capacity to be romantic; either party could identify with a different sexual orientation.

Below is a visual of some common not-so-harmless practices and their underlying message:

A Call to Action

As discussed, there are many ways in which we can perpetuate rape culture. Some of these ways are habitual and occur subtly through normalization.  If you have recognized some sayings, behavioral practices and/or just want to continue to fight against rape culture there are some steps you can take to be more critical about your role in a society that is permeated with normalization around sexual violence and lack of consent. Some things we can do are: