This final segment of our #LiftEVERYvoice series features Recy Taylor.

It is September 3, 1944 in Abbeville, Alabama. After a night of praying and singing at the Rock Hill Holiness Church, Recy Taylor, her friend Fannie Daniel and Daniel’s eighteen-year-old son, West, began their stroll home. As they walk, a green Chevrolet passes by a few times. Taylor, a twenty-four-year-old mother and sharecropper, immediately takes notice. The group watch as the car passes for the last time then slows to a stop. Seven armed white men approach the women. Herbert Lovett waves his gun at Taylor, stating the local sheriff, George H. Gamble, has sent them out to take her in for questioning. They declare she is the assailant of a young white man who had been cut earlier in the day. Fannie comes to Recy’s defense stating that they are wrong. They circle around the young mother as Lovett grabs her by the arm. After she manages to rest free of his grasp, Recy attempts to escape. Lovett cocks his gun, pointing it at Taylor’s head, warning her not to run or he will shoot.

The men shove Taylor into the backseat of the green sedan and drive off the highway into the woods. Upon their arrival, Recy is ordered to remove her clothes. She sobs and pleads with the men to let her go home to her husband and her toddler. Herbert Lovett lays a hunting coat on the ground, ordering Taylor to lie down. He hands his shotgun to one of the men as he proceeds to remove his pants. Standing over Recy, Lovett threatens to cut her throat if she doesn’t act like she does when she lies with her husband. After Lovett rapes Taylor, five other men do the same. Once everything is over, someone assists Recy with getting dressed, ties a handkerchief over her eyes, and pushes her into the backseat again. After driving for a while, the men stop and put Recy out of the car, warning her not to move until they are gone. Once they are gone, Recy Taylor removes the blindfold, pulls herself together, and begins the long walk home.

Once reunited with her family, Recy told her story. Telling her story came with a severe cost, including death threats, porch bombings, and public scrutiny. Recy feared to go to town, in fear that her rapists would kill her. Her father would spend long nights in a tree as he watched over his family home with a shotgun. The brave survivor went forward to report her story to the local law enforcement, trusting that she would be believed and given the justice she deserved. Sadly, as with most of these types of attacks, Recy’s case did not go to trial. The case was shut down twice by grand juries composed of all white males. None of the assailants were arrested nor indicted, even after one confessed. Governor Chauncey Sparks as well as many other powerful political figures of that time put in minimum efforts to give birth to justice, for fear that too much bad news would harm Alabama’s reputation.

Rosa Parks was assigned to Recy’s case as an investigator from the NAACP. The horrific crime was extensively covered by the NAACP and black press. Rosa Parks allied with many African American organizations, labor unions, and women’s groups to form the Alabama Committee for Equal Justice for Mrs. Recy Taylor. Together they developed one of the strongest campaigns for equal justice during this time. The national campaign used the power of stories to mobilize communities.

Even though the justice they deserved was rarely granted in the courts, Black survivors risked their lives to protect their family, using their voices as weapons against white supremacy. Storytelling was action. The refusal to remain silent sparked a national movement to defend the humanity of Black people, dismantle White supremacy, and gain personal autonomy. The outcry and anger expressed amongst the black community led to what we know today as the Civil Rights movement.

Yet even today, there is still a high demand for basic human recognition. Survivors of color are not given the same level of empathy as those who are not of color. Stories are met with disbelief, ignorance, or silence on the matter altogether. The story of Recy Taylor was silenced for a while, but its importance could not be ignored. This story highlights the reality of a movement to end sexual violence that has never been carried out with full inclusion and integrity. As a result, Black people have carried the burden of transgenerational trauma for centuries. In the Black community, survivors have struggled to be heard, and that needs to end. If we are a really going to do the work to live in a world free from sexual violence then we need to #LiftEVERYVoice. If you don’t know the depth of this issue, how can you really create change? If only certain voices are granted volume and attention, how will this movement be successful?

A Letter to Recy 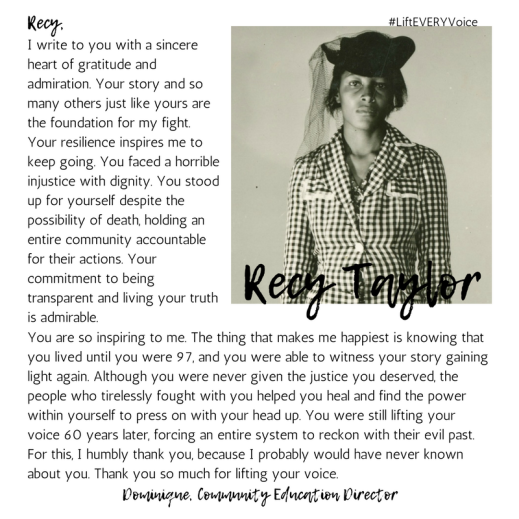 #LiftEVERYVoice is a movement created by STAR® to amplify the voices of survivors silenced by racial oppression.  We seek to uplift, support and empower survivors of color.