There are many people in our community working to create positive change to end sexual violence. We want to feature as many of them as possible. If you would like to submit a recommendation, please email prevention@star.ngo.

You can become an instrument of change, no matter how big or small, by becoming more knowledgeable, facilitating more open dialogue about the issues surrounding sexual violence, and being more empathetic to people in general.

1. What is your relationship with STAR?

LSU Law’s Public Interest Law Society has a Pro-Bono program in which they give law students various opportunities to donate their time and legal knowledge to various local organizations. I decided I wanted to work with STAR and began volunteering January 2016.

2. What led you to get involved with STAR and/or join the movement to end sexual violence?

I have always had a passion for using the skills that I have to help others, specifically those who are often marginalized in our courts. I have a few friends who volunteered with STAR in various capacities and I loved the fact that STAR was working for victims of sexual trauma from every angle–including on behalf of victims as both attorneys and advocates in front of the legislature. I knew working with STAR would allow me to impact survivors’ lives in a meaningful way, so when the opportunity presented itself, I had to get involved.

3. What do you find most rewarding about your participation in this movement?

The most rewarding part of participating in this movement is doing work that will have a direct, positive impact on the lives of others. While working with STAR, I had the opportunity to work on legislation that was ultimately passed. Survivors of sexual trauma go through so much, internally and externally, and are often re-victimized many times when they seek justice through the courts against their assailant.

This has been an ongoing problem for survivors for decades, and it is very rewarding to be able to help change some of the laws that have made it so hard for survivors in the past, so that in the future, they may have one less hurdle to be concerned about when seeking the justice they deserve.

4. What motivates you to keep going when things get difficult or discouraging?

I have always been perseverant. I believe that anything worth having is worth working for and most things worth working for are not going to come easy. So when things get difficult or discouraging, I often remind myself that I wouldn’t be here, doing the work that I do, if I were not able to do it. Life never gives you more than you can handle; so when life throws something at me that makes me uncomfortable or challenges my belief in my abilities, then it does not becomes a matter of figuring out whether I can rise to the challenge, but rather, how I will do so.

When working on behalf of those whose rights and interests weren’t historically represented at all and who have even been stigmatized for what has been done to them, I think it is important to expect opposition to the work being done, and rather than being discouraged by the challenges that come up along the way, relish in the fact that life decided that you were tough enough to handle the difficulties and rise to the challenge.

5. What are some simple, day-to-day ways you promote positive change in our community?

I promote positive change in the community just by informing others. There are many times where someone may express an ignorant view on something, and rather than informing the person of how they are wrong, we may simply pass judgment on that person for their ignorance. But the truth is, that other person may not know any better for many different reasons.

While I was a kindergarten teacher, one of the ideals emphasized to us was to “meet students where they are,” which basically meant that we should avoid forming expectations of where the kids should be, and focus more on where they are, so we could be more effective teachers. I keep this ideal in mind when interacting with adults. Instead of judging others for what they don’t know, I always try to inform them so that they can know and hopefully create a ripple effect of positive information sharing. 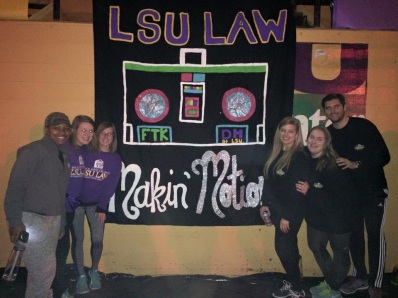 6. What advice would you give to someone who is hesitant about becoming an active member of this movement?

The only reason I can imagine that a person may be apprehensive about becoming an active member of this movement is that they may be concerned with what others might think of them. I would just have to tell them that this movement is all about positive changes that will hopefully lead to the end of sexual violence all together.

If you are around people who would think negatively of you for wanting to end sexual violence, that is all the more reason to join the movement so that you can help crush the stigmas and stereotypes, and so that you can become an instrument of change, no matter how big or small, by becoming more knowledgeable, facilitating more open dialogue about the issues surrounding sexual violence, and being more empathetic to people in general.

Tiffany is graduating from LSU Law School this semester and returning back home to Atlanta, GA to take the Georgia Bar Exam. She is currently seeking various public employment opportunities in both Atlanta and Washington, D.C. She would like to do litigation, on either the state or federal government level, as a district attorney/prosecutor, and also has interests in civil rights litigation, regulation of domestic drone usage, death penalty work and post-conviction procedure. We wish Tiffany the best of luck in her next steps!

To learn how to get involved with STAR, visit our website or email prevention@star.ngo!