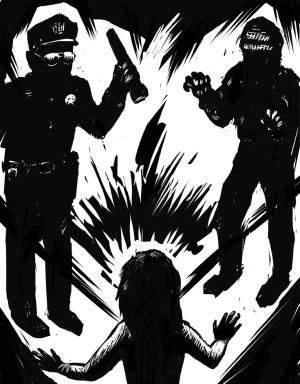 I spent my first six months of graduate school being stalked and sexually harassed, verbally and physically, by another student. I didn’t tell anyone—at all—about the situation at first. I had just moved to a new city, surrounded by people I didn’t know well, and I didn’t want to draw negative attention to myself. I didn’t want to seem dramatic. I was embarrassed. I thought it was my fault. I thought I had somehow confused this guy. I thought I could handle it on my own.

You’ve heard this before, right? You probably already know that the majority of sexual assaults aren’t reported.

And you’re probably familiar with the common reasons why someone who has been sexually assaulted wouldn’t report it: humiliation, self-blame, a desire—after such an invasive experience—for privacy. You might even be aware that 80% of women who have been raped or sexually assaulted knew their attacker. You might understand that these women keep silent for fear of social repercussions.

Slate writer Emily Yoffe knows these stats well, and she demonstrates as much in her recent piece “The College Rape Overcorrection,” a twelve-thousand-word response to the Rolling Stone article “A Rape on Campus,” both of which blew up on social media late last year. Yoffe asserts, “Respecting the feelings of victims is important, and crucial to encouraging more women to report violence. But elevating the psychological comfort of victims over society’s need to punish criminals will only let perpetrators go free.” I am struck by her choice of words here, by her evident concern that some ill-advised people—presumably the victims themselves—are valuing the “psychological comfort” of a select few over the greater need of “society.” For all of her research on the subject, it seems that Yoffe isn’t aware of—or seeks to minimize—the fact that there’s another very common reason women who have been sexually assaulted don’t report: because they believe it is unsafe.

A December 2014 Department of Justice report notes that one in five women who elected not to report rape or sexual assault say they feared reprisal. Many women who opt not to report sexual violence—including stalking and sexual harassment—do so because they fear that the violence will escalate as a result. This decision, then, is not motivated by an interest in “comfort” but in both physical and psychological safety, or at least an effort to choose the least dangerous course of action.

But if women are afraid of escalating violence, can’t they just go get a restraining order? Sure. Restraining orders, or orders of protection, are intended to require someone to stop doing things you don’t want them to do, like beat you, harass you, stalk you, or sexually assault you. There are criminal penalties to pay as a disincentive for breaching these orders. And, sometimes, orders of protection work.

And, sometimes, obtaining or even just pursuing an order of protection escalates an already violent situation. An order of protection is a piece of paper. Advocates for victims of sexual violence concede that it can’t protect you from harassing phone calls, psychological abuse, or physical assaults. If someone wants to kill you, a restraining order is not going to save you. Stalkers are particularly unresponsive to those pieces of paper; over 60% will reengage in stalking behavior despite interventions, arrests, and orders of protection. Because of these risks, advocates say, the person best positioned to determine whether authorities should attempt to intervene in or moderate the sexual violence that is inflicted upon you is not a local cop, not a judge, not a university administrator, and not Emily Yoffe. The person best positioned to make that call is you.

I should note that there is a distinction between reporting sexual violence to friends, parents, significant others, professors, administrators, etc., and the reporting that sets the so-called wheels of justice in motion. The first kind of reporting can and often does happen without the second ever occurring. After a couple months of being stalked and harassed, I realized that I should let a few trusted classmates know what was going on, in case I ever needed an escort or someone to help me de-escalate a situation and I didn’t have time to explain the whole story on the spot. These classmates were, without exception, supportive.

The harassment and stalking continued. I took to hiding in the bathroom after a class we had together in a building on the edge of campus—a class he’d scheduled because he knew I was taking it. I would stand in the bathroom and wait and hope that he would walk away rather than do what he usually did, which was follow me out of the building and all the way across campus. After six long months—at which point I finally realized that nothing I said to him would keep him from harassing me and that I was flat-out too exhausted to go on like that anymore—I met with the university advocate who dealt with incidents of stalking and sexual violence. I separately, finally, alerted a professor I trusted as to what was going on, and she let the other professors in our department know too.

The advocate strongly encouraged me to file a report—she told me that she was actually supposed to get the paperwork going just by virtue of the fact that I’d reported the activity to her. But, she said, I could take some time to decide if I wanted to make the report official. Because once the official report was triggered, it meant that the man who had been terrorizing me for six months would be alerted to the fact that he’d been reported. Not only would he know that he’d been reported—he would know that I had reported him.

This is someone who had come to my house at 2:30 a.m. and pounded on the door while calling and texting me nonstop for half an hour. (Why didn’t I call the police? I thought maybe I’d be overreacting. I thought it was my fault. More than anything, I now wish that I had called the cops on him that night.) I knew this man had a violent past, that he was arrogant, and that his position as a graduate student in this program mattered a great deal to him. I knew that if I reported him, I was threatening that position. When I initiated the conversation with the advocate—before I even made a decision regarding the official report—I spent two weeks terrified that I would find him waiting at my door. The university states that, similar to an order of protection, they have a zero-tolerance policy for retaliation after reports of sexual violence. That assurance meant nothing to me. A “zero-tolerance policy” for retaliation doesn’t protect me from retaliation. It doesn’t guard my front door, it doesn’t walk with me across campus, it doesn’t watch me after I leave a late-night MFA reading and walk back to my car.

But I was prepared to report him. I went to the final meeting with a professor who had offered to accompany me (the professors were, without exception, supportive) and I didn’t cry the entire time—until it came time at the end to say yes, let’s file the paperwork. I started sobbing, and I told the advocate that if I had to report him so he wouldn’t do this to anyone else, I would do it, but I was scared. And my professor put a screeching halt to the meeting. She told me I didn’t have to enter into any official process, and at this point she would advise me against it.

So I didn’t report him. Not for my “psychological comfort” but because I believed that it would put me at risk of bodily harm. I didn’t report him, he eventually stopped stalking and harassing me, and I have been told that he went on to terrorize at least three other women—two on our campus and one at his PhD program. I imagine he started long before he met me and will continue long after. For now, he gets to do it from the stance of a PhD student who instructs undergraduates. Maybe later he’ll get to do it as a professor. And I am accountable because I didn’t report him.

But let’s not pretend that decisions like mine are motivated by a self-indulgent desire for “psychological comfort.” Because that’s fucking insulting. These decisions are about safety and the inability of our existing structures— within and outside the university—to offer it. This failure cannot be overstated, least of all in the city of New Orleans, where in November a probe by the city’s inspector general revealed that five of the eight NOPD detectives assigned to investigate sex crimes didn’t even bother to investigate 86% of requests for police assistance from 2011 to 2013.

The women who don’t report sexual violence—and remember, the number of women who don’t report is “most of them”—are not delinquent or negligent in some responsibility to the greater good. In not reporting, these women are taking action; they are enacting refusal. I didn’t report the man who stalked and harassed me because, in my rational assessment of the existing threat, the university’s investigatory and judicial processes, the likelihood of retaliation, and the protections offered, I reasoned that I would be safer crossing my fingers and hoping for the best than seeking recourse from the police or the university. In our city, and in every city, women are physically and psychologically terrorized on a daily basis. And the systems currently in place that claim to protect women are so ineffective—the risks of participation are so great—that a majority of women are opting out of them.