In our first Consent Campaign essay, we explored how those who commit rape often use alcohol as a tool to incapacitate and control their victims. In this essay, we’re tackling the connection between alcohol and unhealthy norms of sexual interaction.

Being sexually immature means wanting to do it, but not wanting to talk about it.

The illusion of societal freedom that inebriation allows lets men and woman get what they want (sex) in an environment that is ’emotionally safe.’ Being drunk offers men the ‘courage’ that they are worth enough to earn women and can go out and let their desire be known. It allows women who want sex the excuse that the reason they gave up that which makes them most valuable was due to the freedom of alcohol. Until society accepts sex for what it is socially, an emotional and physical performance between two people fulfilling mutual desires, then we will continue to see such societal issues as poor self-esteem, body image issues, the objectification of women, ‘rape culture,’ etc.

In our culture, it is common for young women to be shamed for expressing sexuality and for young men to be taught that without having sex – and lots of it – they are not “real men.” Holding opposite sexual expectations for men and women sets many sexual relationships up to be adversarial rather than allowing for mutual respect, open and honest communication, and shared goals:

These opposing expectations often result in young women using alcohol to remove inhibitions placed on them by society and their peers, and in men thinking that women are saying “no” only as a charade to protect their reputations. To fulfill the expectation of racking up sexual experience, many young men learn that it is acceptable to use alcohol as a tool for “loosening up” potential sexual partners. Instead of being able to openly communicate about one’s true feelings and desires about specific sexual interactions and relationships, it is common for young adults to use alcohol as everything from a manipulative tool to a crutch when it comes to sex. The problem? Healthy sex requires clear judgment and open communication.

It’s important to consider that a culture of drunk sex is not liberated; it is the opposite. Drunk sex is not an alternative to sexual repression; it is the flip side of the coin of sexual repression. It shows us that we have not progressed to the point where young people don’t need to rely on alcohol to escape or ignore oppressive and negative attitudes about sex. It shows us that we are unable to talk openly about what healthy, consensual sex looks like in practice and how to establish that as the norm – without fearing backlash. And it shows us that we, as adults, have routinely failed to equip young people with the tools to engage in healthy sexual relationships as they grow and enter adulthood.

“We are taught two things about intimacy: what not to do, and what not to get.” -Mike Domitrz

It is not sufficient to only instruct about the nots and don’ts when it comes to sex. We must be able to engage in conversations about true, genuine, and healthy sexual expressions. Unfortunately, this continues to be taboo in far too many cases. Societal norms prevent open discussion about sexuality, and while this may be changing in some ways or in certain peer groups or communities, our overall sexual culture is characterized more by oppression, violence, silence, and stigma than by health, safety, and mutual empowerment and enjoyment.

As long as we expect young men and women to behave in opposite ways when it comes to sexuality, sexual violence will flourish. As long as we are unable to have open dialogue about healthy expressions of sexuality and work collaboratively to promote a vision of healthy sexuality for our communities and institutions, harmful expressions of sexuality will continue to find a breeding ground. Sex offenders will continue to exploit certain children’s lack of knowledge about healthy and appropriate sexual expression and boundaries. Far too many young men will continue to use tactics of pressure and coercion, and tools such as alcohol to get what they want sexually. Far too many young people will continue relying on alcohol and other drugs to loosen themselves and their partners up in order to have sex, without meaningfully and maturely communicating about the sex they are having.

We cannot reduce the prevalence of sexual violence in our communities until we promote and establish healthy alternatives. People’s personal beliefs about sex vary, and this is okay. In fact, it’s more than okay! The beauty of establishing healthy sexual norms is that everyone, based on their personal beliefs and values, gets to set their own boundaries concerning sex, with the collective understanding that everyone must also respect others’ boundaries. Unless people’s sexual values and beliefs make them feel entitled to violate others’ bodies (as some currently do), there isn’t a problem.

We need to begin focusing on how to ensure all sexual interactions are consensual, informed, respectful, and enjoyable – a concept that our next blog post will explore. For starters: when it comes to sex, shouldn’t the attraction be intoxicating enough? 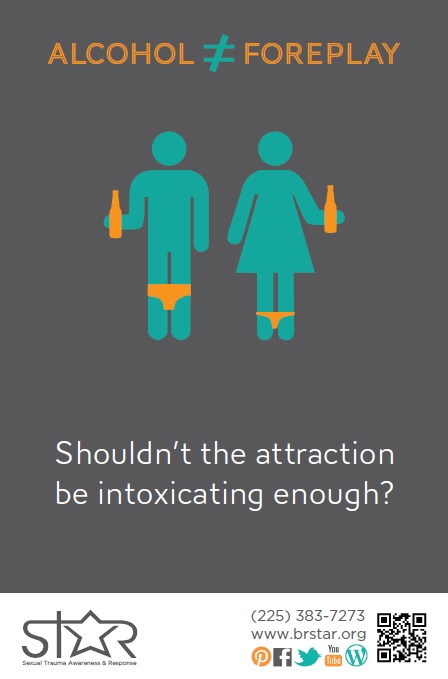