“When I returned to work [after I was raped] and was on the elevator with people I knew—I felt like I had a scarlet ‘R’ in the middle of my forehead. I felt branded by my assault and was confident that my scarlet R was all they saw.” (Source: Putting the Focus on Victims)

Stigma, simply defined, is a mark of disgrace. Yet this doesn’t tell the whole story. Not nearly.

Stigma can be overwhelmingly oppressive. It can squeeze the breath out of you, bring debilitating anxiety, cause you to see yourself differently and feel like others will never look at you the same way again. It engenders feelings of shame, self-blame, worthlessness, and intense fear, all of which conspire to force you into silence, even perhaps toward those to whom you thought you could tell your deepest, darkest secrets.

This internalized shame appears to come from within, but it actually comes from years of existence in the external world. It comes from a culture’s common knowledge that masquerades as truth – for instance, that people “allow” themselves to be victims or that a woman’s worth is tied to her sexual “purity.”

Stigma says nothing about an individual, rather it is a mirror that reflects our culture and its norms – those collective expectations we hold for ourselves and others. When an individual experiences stigma associated with sexual violence, it must be viewed as the mark of a culture in which vulnerability is more shameful than committing violence, as is true in our culture. This is why we admonish people for their nonviolent behaviors rather than working to challenge violence and dominance as cultural norms. We shame victims for what they were wearing, how they were dancing, what they were drinking, where they were walking, or why they didn’t lock the deadbolt. We conveniently forget that a person is only “vulnerable” when there is a violent threat present. We ignore the violent threat and focus on the vulnerability.

Survivors of sexual violence experience trauma from the violation itself, yet many will experience greater trauma in its aftermath. The stigma of sexual violence magnifies any other stigma associated with an individual. Offenders often target victims who they know can be easily stigmatized in our culture, such as women, girls, gay or gender nonconforming men, trans people, substance abusers, sex workers, homeless individuals, and people who are chronically mentally ill. Women are vengeful liars, adolescent and teen girls are fair game, gay men and trans people ask to be raped, sex workers can’t be raped…these are only a few of the pervasive myths that condemn survivors to repeated re-traumatization by keeping us focused on what the victim did (violated social norms) rather than on what the offender did (violated law and another human being).

This is how stigma functions as a barrier to accountability, justice, and social change – it is a key ingredient in the rape culture recipe that pressures survivors into silence, blames them for the violence that others have committed against them, and prevents us from holding offenders accountable for this violence – because how do we hold someone accountable for violence that we refuse to acknowledge? The result is that offenders remain free to continue committing violence and abuse against others. We at STAR see this happen time and time again.

When survivors speak out, they risk a lot. They risk not being believed or being blamed for someone else’s violent behavior. They risk being unfairly scrutinized and judged for nonviolent behavior while others’ violent behavior goes unchallenged. In some cultures, survivors risk being murdered for having “provoked” sexual violence and bringing shame to their families. In our culture, many survivors are simply blamed for having provoked sexual violence, then are bullied, intimidated and shamed sometimes to the point of suicide. This is more than regrettable, it is unconscionable.

It is time for all people to recognize and challenge the stigma that we have all perpetuated at one point or another. This starts by listening to, believing, and supporting survivors. It starts with educating ourselves on the true dynamics of sexual violence so that we no longer buy into the rape myths and misconceptions that drown us in ignorance and bring others down with us. It starts with us ceasing to act as accomplices to offenders, playing right into their hands by heaping shame, blame, and judgment on those they have abused while ignoring their unacceptable violence and traumatizing boundary violations. The time for change is now, and it starts with all of us. It starts with you. 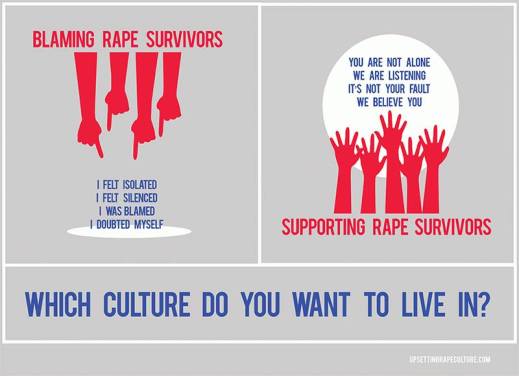 3 thoughts on “The Scarlett “R” – Stigma, Shame and Speaking Out”