St. Bernard Parish President David Peralta said Tuesday that his wife has withdrawn a sexual assault complaint against him, a day after State Police revealed they are investigating an allegation against the first-term parish leader.  See more here.

Man from Baker kidnaps, rapes and robs a woman at knife point on Friday, November 2nd on Plank Rd.  See here for more.

Daisy Coleman is quickly becoming a household name now that she’s speaking out about the sexual assault that was perpetrated against her in a small Missouri town. The 14-year-old was raped by a high school football player and left semi-unconscious in her front yard in the middle of a January night 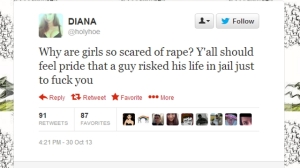 A company named AR Wear is marketing ‘Anti-Rape Underwear’.  They are marketing it as  “a clothing line offering wearable protection for when things go wrong.” The line includes several different types of underwear and shorts that are intended to be difficult for a sexual predator to remove.  Tara Culp-Ressler from ThinkProgress says that while the company may have good intentions, thinks they are missing a “few crucial points about the reality of sexual assault.”

See more here and watch the underwear advertisement below.

What are your thoughts on the issue?

Click on picture or here to read some beautifully written poetry on the issue of rape.