“Rape is not a recreational activity.”

Trent Mays and Ma’lik Richmond of Steubenville, Ohio, were recently found delinquent of rape. Often, when the public hears about a man or multiple men having raped someone who is drunk to the point of being nonresponsive and passed out, many are quick to point to the victim’s excessive drinking as the cause. She should have known better. They hold the victim accountable for her decision to drink and for the perpetrator’s decision to rape her. The assumption is that men are entitled to women’s bodies, that they have no control over their own behavior, and that it is women’s sole responsibility to stand guard over their bodies at all times. If a woman fails to do so and a man rapes her, again: she should have know better.

One reason why so few rapists are held accountable for their crimes is that “She didn’t say no” is a common and often successful defense when combined with the implied “She’s a drunk whore and is therefore responsible for my decision to rape her.” As in countless other cases in the courtroom and the court of public opinion, that was the defense in Steubenville, but in this particular case it was not successful.

Much has already been said about the role social media has played in this case, and there are a number of important lessons the public can learn from this case. However, I’m not referring to the lessons that teenagers be careful about what they post on social media or that they refrain from underage drinking. I’m referring to the lessons that they be careful to not commit crimes against other people and against the state, that they treat other human beings with respect, and that they not commit rape. I’m talking about the lesson that that we as parents and community members must do more to educate our young men and women about rape, sex, consent, and respect. (Young women, in addition to being statistically more likely to be victims of sexual assault than boys, are often their female peers’ harshest critics in these cases.) 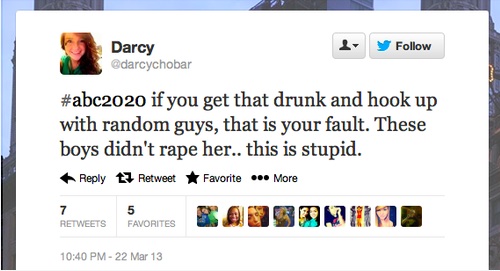 As traumatizing as the social (and traditional) media exposure has undoubtedly been for the victim, the only silver lining is that it has partially demystified rape. For the first time, the general public got to see what rape really looks like, and it became more difficult (though still possible) for us to condone it as acceptable or excusable behavior from our young men. As Adam Cohen wrote in TIME:

“All of this documentation proved critical to a conviction. Sexual-assault trials often come down to “he said, she said” battles. Cases like the Steubenville rape, which the victim has few memories of, can be especially hard for prosecutors to win. Text messages from wrongdoers and viral photos and videos from bystanders can provide a robust record of what actually happened. Social media can also shine a needed light on how people actually behave. When high school football players, and other young athletes, are charged with sexual assault, many people believe reflexively that they are not capable of the sort of crude and cruel behavior they are accused of. The 12-minute video and some of the other online evidence in the Steubenville case are powerful refutations of that rosy view. Anyone who sees them can understand precisely how the attack happened.”

For a rape prevention educator such as myself, Steubenville is – in all of its awfulness – helpful. It perfectly illustrates a number of the issues that I talk about in the sessions I facilitate, such as the problem with objectifying women, and it disrupts the narrative that rape is fundamentally about sex, as hardcore punk artist Henry Rollins wrote in an essay to process his thoughts on the Steubenville case:

“It is obvious that the two offenders saw the victim as some one that could be treated as a thing. This is not about sex, it is about power and control. I guess that is what I am getting at. Sex was probably not the hardest thing for the two to get, so that wasn’t the objective. When you hear the jokes being made during the crime, it is the purest contempt.”

Steubenville paints a portrait of perpetrators who are popular, athletic, and drunk on a dangerous cocktail of hypermasculine power and entitlement. It makes plain to the general public that we live in a rape culture, as writer Laurie Penny points out in her argument that Steubenville is rape culture’s Abu Ghraib moment:

The pictures from Steubenville don’t just show a girl being raped. They show that rape being condoned, encouraged, celebrated. What type of culture could possibly produce such pictures? Only one in which women’s autonomy and right to safety counts for so little that these rapists, and those who held the cameras, felt themselves ‘perfectly justified’. Only one in which rape and sexual humiliation of women and girls is so normalised that it does not register as a crime in the minds of the assailants. Only one in which victims are powerless, silenced, dismissed. It is impossible to imagine that in such a culture, assault and humiliation of this kind would not be routine – and indeed, the most conservative estimates suggest that ninety thousand women and ten thousand men are raped in the United States alone every year. That’s what makes the Steubenville case so very uncomfortable – and so important.

For a number of people, the next time they hear about a “drunken rape victim” or an “athlete accused of rape,” they will have a powerful point of reference. Rather than thinking “she’s lying,” “she asked for it,” or “she should have known better,” they might think about how it’s both inexcusable and illegal to make and then act upon the decision to rape another person. They’ll think about the profane, ugly, criminal behavior displayed by Mays and Richmond (and their peers) that night.

Conventional sexual assault prevention wisdom says that when talking to men about rape, it’s best to approach them as allies because most men are not rapists. At the same time, the Steubenville case has shown that the pro-offending attitudes of rapists are actually quite common and supported by friends, family members, and communities who react to rape with everything from high-fives, jokes and laughter to blind eyes, victim-blame, and cover-ups.

Everything that has happened in Steubenville has been very difficult — very, very sad — and very tragic. But let me be clear — this is not just a Steubenville problem. This is a societal problem. What happened here is shocking, and it is appalling. But what’s even more shocking and appalling is that crimes of sexual assault are occurring every Friday night and every Saturday night in big and small communities all across this country. And there comes a point, where we must say, “Enough! This has to stop!”…Rape is not a recreational activity. We, as a society, have an obligation to do more to educate our young people about rape. They need to know it is a horrible crime of violence. And it is simply not ok.

We do need to do more to educate our young people about rape. We need to start by educating ourselves and being active bystanders ourselves. By promoting the message that women are autonomous, fully human, sexual subjects, not objects to be had. Using available resources, parents and youth-service providers must begin including our young men in conversations about rape prevention – conversations about consent, double standards, victim blame, personal and social responsibility, accountability for our actions, sexual entitlement, and the law.

And before vehemently casting stones at the town of Steubenville , or even at Mays and Richmond, we need to ask ourselves: would our community have handled it differently? Does our community handle it differently? Do we hold our young men accountable for the rapes they commit? Do we hold our young men and women accountable for their behaviors that perpetuate rape – for their decisions to harass, slut-shame, and victim-blame? 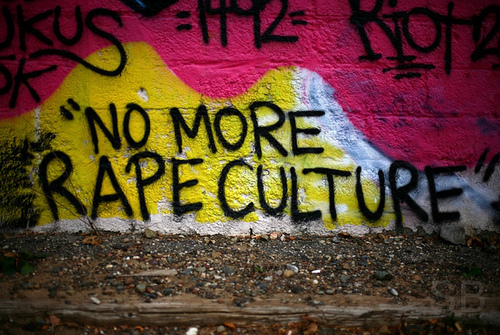 With the lessons of Steubenville there for the taking, will we handle it differently starting now?

If you are interested in learning more about the rape prevention education resources available to the Baton Rouge community and surrounding areas, email prevention@brstar.org.

3 thoughts on “(Rape) Culture of Entitlement”